PROMOTING TOLERANCE FOR THE FUTURE OF ESPORTS 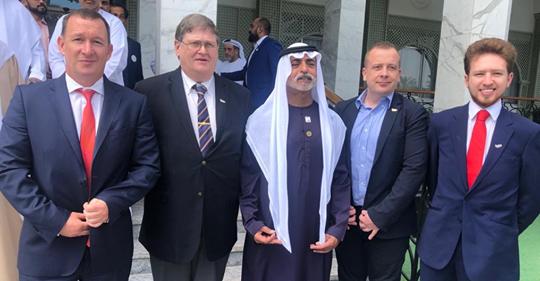 During such occasion, the delegates from IESF also joined lunch with His Excellency, UAE Cabinet Minister and Minister of Tolerance, at His Residence in Abu Dhabi.

IESF President, Colin Webster, on behalf of IESF, thanked His Excellency for his hospitality and congratulated him on the leadership that Sheikh Nahayan has provided promoting tolerance throughout the world.

“WITH THE AIM OF FINDING A UNIVERSAL PEACE THAT ALL CAN ENJOY IN THIS LIFE.”

Sport is a very powerful vehicle for promoting peace and stronger ties between communities, and Esports are no different and due to its connectivity could have an even greater impact.

Sheikh Nahayan supported a federal decree for the establishment of an Esports governing body in the UAE through his previous portfolio of Culture and Knowledge Development.

IESF President Colin Webster said, “In many ways, Sheikh Nahayan is the father of Esports in the United Arab Emirates, which I believe, at that time, was the first of its kind in the Arab World.”

IESF Board emphasized the need to further promote tolerance throughout the Esports & gaming sector. As a global movement dedicated to the promotion of Esports and all positive values through it, IESF is keen to engage in further dialogue and discuss possible collaborative opportunities.