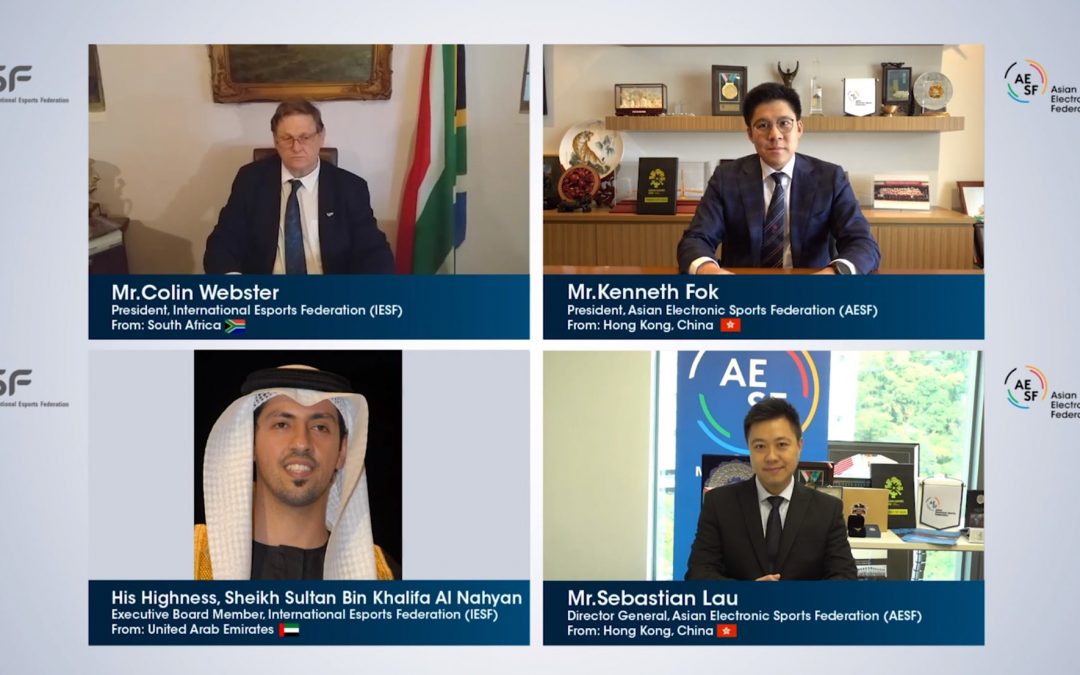 The world of esports governance has reached a significant milestone with a landmark agreement between the International Esports Federation (IESF) and the Asian Electronic Sports Federation (AESF).

On 31st March 2020, the IESF President Mr. Colin Webster and the AESF President Mr. Kenneth Fok both signed a Memorandum of Understanding (MOU) to form a formal collaborative relationship to promote and advance esports globally as well as across the Asian continent. Under this MOU, the IESF recognizes and acknowledges the AESF as the sole federation for esports in Asia. The AESF recognizes and acknowledges the IESF as the sole international federation for esports.

Due to the outbreak of COVID-19, the signing ceremony was conducted remotely and digitally in the home nations of all signatories of this important partnership, including Hong Kong, Johannesburg, and Abu Dhabi, as well as messages from other parts of the World.

This is a significant step for Asian esports that will also have an impact globally. It is expected that other continental federations will also be part of this alliance working collectively in the interests of esports, the safeguarding and protection of players being a top priority. This MOU unites in one umbrella all Member Associations and Federations, thereby confirming a clear and transparent structure of esports globally.

“The MOU between the IESF and the AESF further reinforces IESF’s position as the only true international federation for esports. The IESF was founded in 2008 and today is the largest international federation of its kind and is acknowledged to be the leader in its field. The MOU thus solidifies the IESF’s position, as well as that of the AESF. Together, the two federations will ensure a greater degree of delivery and expertise, as well as ensuring the development and recognition of esports as a sport.”

“I am sure that the partnership today is strong enough to unite the esports community, including publishers, organisations, and most importantly our esports players. It is also groundbreaking as it paves the way for better collaboration and cooperation between the International Esports Federation, IESF and the Asian Electronic Sports Federation, AESF. This is an exciting day for us and we look forward to new initiatives from this partnership. Lastly, I like to take this opportunity to thank everyone involved.”

“Esports is becoming ever more prominent in mainstream culture, the need for relevant governance structures, education programs and development pathways to support the growth globally is essential to ensure the welfare and integrity of all that participate, fostering healthy and positive behaviors. The spirit of the games must be first and foremost.

The closer relationship between both the IESF and AESF will provide the credibility and legitimacy of these activities, and we encourage other continental federations to be part of this growing family.”

“Today marks a significant and momentous milestone in the evolution and development of esports. The unity between the IESF and the AESF will reinforce the foundation of the Asian Continent – from the national associations to all stakeholders, including athletes, publishers and event organizers. Moreover, it will send the message globally that esports is united, and united we can, with respect and inclusion, further develop for the benefit of the people playing. I’m honored to formally join forces with Mr. Fok, Mr. Lau and the AESF team, people who share our passion and professionalism. Great things are coming.”

“This partnership with the IESF is a key milestone as part of our strategic master plan to develop and support the growth of esports globally. Working together with all members, publishers, athletes, and stakeholders, we have a strong belief that it has to be sustainable and should be able to create a sound ecosystem where our esports community can grow collectively. I truly believe that with the help from our partners at IESF who share the same vision, these goals are absolutely within our reach.”

International Esports Federation (IESF) is a non-profit organization founded in 2008 that consistently works to promote esports as a true sport beyond barriers. IESF is composed of more than 60 member national federations across all continents, organizes annual World Championships and strives to ensure the synergy between stakeholders. Its esports academy strives to improve the level of academic research and also professional development of officials in the industry. IESF is a WADA Signatory since 2013. Key IESF activities include the IESF World Championships, the IESF General Assembly uniting all National Federations and the Global Esports Executive Summits.

Asian Electronic Sports Federation (AESF) is the sole governing body of esports in the Asian region and is also recognized by the Olympic Council of Asia (OCA). Following the implementation of the esports Demonstration Games at the 2017 Asian Indoor and Martial Arts Games in Turkmenistan, the AESF successfully staged esports at the 2018 Asian Games in Jakarta which saw six titles contested and having esports athletes accorded equal stature to their traditional sports counterparts. Also, the AESF, at the 2019 Southeast Games in Manila, brought esports to fans and media as an official medal sport event for the first time in its history and will again be responsible for showcasing esports at the 2021 Asian Indoor and Martial Arts Games in Thailand as an official medal event. The AESF has launched its own competition, the ‘AESF e-Masters’ series in January 2020 and will soon introduce the ‘AESF University Championship’ and ‘AESF Amateur League’ for the esports fans and players in Asia.