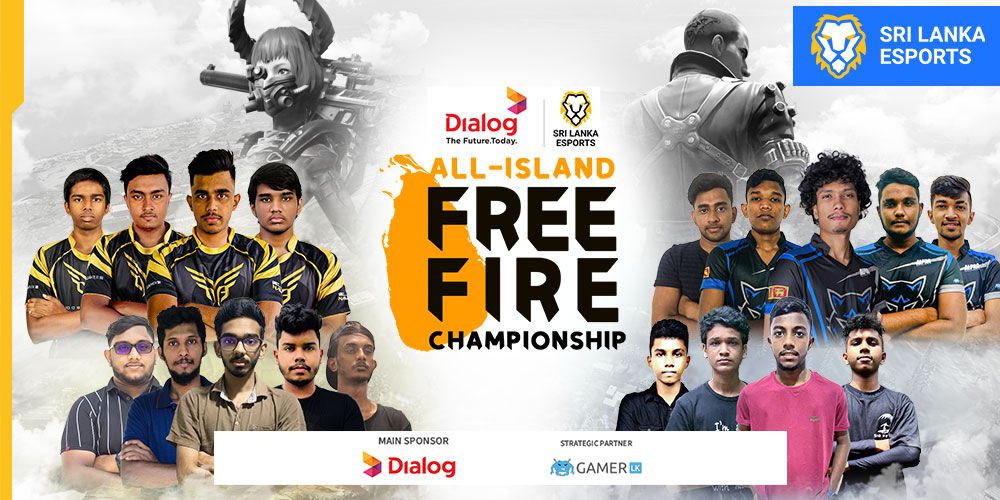 The Sri Lanka Esports Association (SLESA) in partnership with Dialog Axiata and Gamer.LK is hosting a district-level Free Fire tournament for the top players in the country to prove their skills with a prize pool of Rs. 1 million up for grabs.

Registrations for the tournament concluded earlier in June and saw nearly 500 teams registering to take part in the tournament from across the country.. The tournament had two rounds of matches, where teams first competed in district qualifier games within the district they registered to represent and the winners would then qualify for the second round of the tournament, the semifinals which took place in August.

Some of the teams that have performed outstandingly throughout the tournament and are predicted to win the finals include nA – ARCHANGELS A from Batticaloa, with 10 wins and nA – NEVERSTOP from Moneragala, Ae-S – SLR GHOST from Ampara and nA – NEGU SL from Kandy with 8 wins apiece.

Many players had a chance to stand out and be recognised as the best Free Fire players in the country through this tournament like BOH xDream who scored 88 eliminations to drive his team Me-S Brotherhood from Galle into the grand finals despite early difficulties to secure wins and players like OhhmyJosh!! from team Ae-S – SLR GHOST of Ampara who is considered one of the best sniper players in the SA region, has had stellar performances in both the district qualifier finals and semifinals bagging 20+ eliminations in each of those games.

As for the teams, nA – NEGU SL who are ranked #1 by SLESA in the National Free Fire rankings faced some severe initial adversity at the district qualifier level and just managed to pick up their game by the semis to stay in the finals mix. NEGU SL and Me-S – BROTHERHOOD are leading the way in points which make them formidable contenders as grand finalists despite their shaky starts.

Dialog is the main sponsor of the Championship. As one of Sri Lanka’s largest telecom service providers, Dialog is known for their home broadband and wide range of data plans, which connects gamers all around the country.

Gamer.LK is the strategic partner for the Championship bringing 15 years of Esports experience across league operations and broadcast productions which aims to elevate the event to rival tournaments within even the South Asia region.

The grand finals is set to take place online on the 10th and 11th of September 2022 and will also feature an exciting deep dive into Gamer.LKs metaverse. Catch the action on livestream here (link)